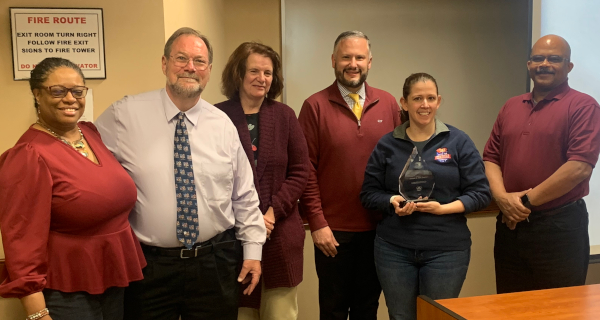 Hannah Suhr, a Cumberland County lawyer who recently left private practice to become Assistant Counsel for the Pennsylvania Department of Human Services, Office of General Counsel, was honored with the Pennsylvania Bar Association's 2022 Verdina Y. Showell Award in honor of her commitment to the Wills for Heroes program in Pennsylvania.   Suhr was presented with the award by PBA Young Lawyer Division Chair Paul Edger and longtime PBA leader Wes Payne, now Chancellor of the Philadelphia Bar at a Wills for Heroes event at Chestnut Hill College in Philadelpha on Saturday, April 30th.  Edger thanked Suhr for her support of Wills for Heroes and noted that he had just appointed her to serve statewide as one of the WFH State Coordinators.  Payne celebrated how more than 19,000 estate packages have been provided at no charge through the PBA YLD program.

A dozen first responders, veterans, essential personnel, and their significant others, received free estate planning services that Saturday in a program that highlighted Suhr's appreciation of the men and women who protect our freedom and safety every day.  Not knowing the award awaited her, Suhr drove over two hours from her Cumberland County home to Philadelphia for a program that started with set-up at 7 a.m. and ended after 4 p.m.

Attorney Suhr is no newcomer to WFH events.  Beginning with her first program in 2009 when she was still a law student at Penn State Dickinson Law , Suhr has directly helped thousands through WFH.   Suhr has made WFH a family affair, from bringing her then Widener Commonwealth Law student husband to that first event in 2009 to using family and friends as document witnesses over the years.  Suhr has also involved her mother, Lisa Suhr, a notary, in the program from those early years, with her mother working a dozen or more events each year for over a decade.  In the audience on April 30th was her mother, who had traveled with her daughter that day to be both part of the surprise award presentation and to serve, once again, as one of the notaries for the event.

The Wills for Heroes program is the largest pro bono program of the Pennsylvania Bar Association.  The PBA's Showell Award honors the legacy of attorney Verdina Showell, Exelon’s East Pro Bono Coordinator, who coordinated in 2008 with the law firm of Ballard Spahr Andrews & Ingersoll L.L.P. to conduct Pennsylvania’s first Wills for Heroes legal clinic at Exelon’s Limerick Nuclear Generating Station.  She passed away the next year after becoming a chair of the PBA's Legal Services to the Public Committee.